Posted by Admin on Tuesday, 19 January 2016 in Uncategorized 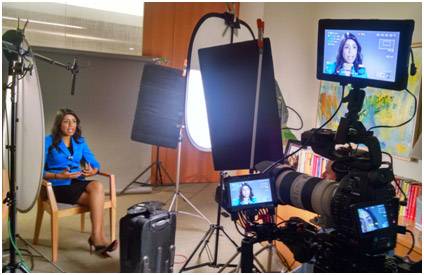 The majority of my clients require interviews to be filmed and often the person in charge of asking the questions does not have experience interviewing for video purposes. Here are some helpful tips:

• WARM THEM UP: When time permits it’s often best to use throw away questions at first and get them to relax. When finished, if they are much more themselves at the end, repeat the first few important questions.

• PARAPHRASING: Most subjects we interview are accustomed to watching television news where the reporter’s questions are heard. On our corporate and documentary videos the questions will not be heard. Therefore, the subject needs to paraphrase the question within the answer. They need to know this before the interview starts or editing problems will invariably result. The simplest way I explain this to the upcoming interviewee is to say, “If I ask you what you had for breakfast you cannot say Cheerios. You need to say: I had Cheerios for breakfast.” 99% or the people will understand this but often forget to do it. Be aware during the interview to listen for this problem and you may need to ask them to repeat the answer so it is usable.

• PRONOUNS: It is best to forewarn the interviewee not to use pronouns such as he, she, they, it, etc. because in editing that sentence may not make sense and will cause problems. Ask the subject to use the descriptor, such as the name of the man instead of “he”.  It is perfectly acceptable after listening to the answer to ask for it to be repeated avoiding the pronoun. You will see during editing how much more effective that will be. If they do not avoid using a pronoun there is a higher chance you may not be able to use their answer since the audience will not understand what they are referring to.

• THE POWER OF RESTATEMENTS:When the interviewee gives their first answer often it is too long, disjointed, have “ummmms”, etc. By active listening you can distill their answer down to it’s essence. For example, if they just answered about how much they appreciate their staff’s support, you shouldfollow up with, “So it sounds like you have some great people working for you…” In this way you will find that by using a restatement they will distill the previous answer down to its essence, with more conciseness and emotion.

• AVOID CONVERSATIONS: In some situations, especially in a documentary or investigative journalism, the interviewer may want to have a lengthy conversation and assumes it will all “come together during editing”. Having a conversation makes the editing much more challenging unless it is a two camera shoot where one camera is on the interviewer plus there is a lot of B-Roll to cut away to.  Please do not assume that it can be “fixed in the edit” because often it can not, plus it adds to the amount of time to edit and your budget. Attention spans are short and it helps if they get to the point.

• STAY SILENT and NOD: During regular conversation we make noises that we are unaware of but can hurt the audio track by saying affirmative expressions such as “Uh huh”. It is best to be silent and use your facial expressions to show your emotion and make constant eye contact. Beware that their voice does not overlap the last word of your question nor you overlap them. That situation will create more editing problems. If they do break eye contact during a crucial answer, and it does not look natural, it is best to have them repeat their answer.

• KEEP IT “EVERGREEN”: Ask the interviewee to avoid dating their answer by being more general in terms of describing a time period. For instance, instead of a corporate executive saying “In our last quarter…” she should say something more general such as “recently we experienced…” Definitely avoid mentioning the year if you want the video to have a long shelf life.

• COMBAT NERVOUSNESS: Some subjects will be nervous, especially when they enter the film crew’s zone and see a jungle of lights, cables, cameras. If you know ahead of time the person being interviewed will be nervous, there are a few tricks we can use. Have them arrive early and see the environment without the lights on. Get them to converse with the friendly crew. Tell them the first few answers won’t be used. If they are still nervous you can pretend the camera is not rolling, have the videographer turn off the red tally light on the front of the camera. Use a secret predetermined signal so the cameraman turns the camera on and then “rehearse” the interview with the nervous subject. In most cases this will do the trick but make sure they maintain eye contact even if they think it’s not for real. Request the crew stays out of the subject’s eye line.

• WRAP UP:When you feel you have what you need, why not ask the subject if there is anything you forgot to ask or they would like to say? Often they will come up with a golden nugget.

• MEDIA ASSETS & B-ROLL: Now that the interview is over think back on anything relevant they said that lends itself to “cutting away” for viewer relief and eye candy, and request the interviewee provide anything they have. Ask for still photos, videos, articles, anything relevant. Have the videographer film the subject in their natural environment. Walking, working in their environment and meeting shots are very helpful. Perhaps get shots of the exterior of the building and signage. Do not underestimate the amount of this B-Roll you will need because the audience is used to seeing many cut-aways.

• TECH CHECK: There is nothing wrong with asking the videographer to play back a random take so you can rest assured everything was working properly. You should bring a hard drive that is compatible with both PC and Mac so the cameraperson can transfer the media. Ask them to keep a safety copy of your footage for several days until you can make your own back up copies.